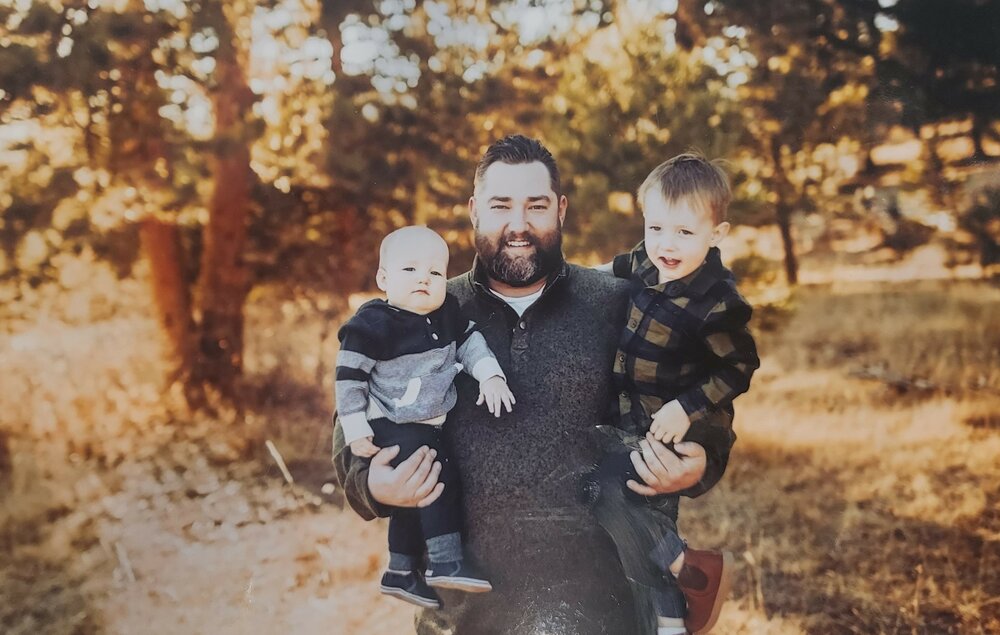 Adam Robert Casimir Reihl, 34, of Parker, Colorado, passed away on September 14th, 2022 from injuries sustained in an automobile accident.

He was born in Streator, IL on November 5th, 1987. He grew up in Orfordville, Wisconsin and relocated to Colorado in 2013 where he met the love of his life, Dianna.

Adam was the son of Bill & Lisa Nyman of Orfordville, WI and Gerald Reihl & Sherry Gertenbach of Blue Ridge, Texas. He will be deeply missed by his wife of five years, Dianna (Denman), and their sons, three-year-old Jackson and one-year-old Holden. He is also survived by his Grandparents, Robert & Lynn Fosler of Beloit, WI, Richard & Darlene Nyman of Footville, WI and Ned & Marilyn Champlain of Streator, IL.  He was loved tremendously by his sisters, Jerilyn (Nick) Johnson and Kaitlyn (Ryan) Voss, both of Belleville, WI, as well as his brothers, Aaron Reihl of Oglesby, IL and Collin Reihl of Streator, IL. He was idolized by his nephews, Gavin Shearer and Gage Johnson of Belleville, who he loved dearly. He was cared deeply for by Dianna's parents, Bob & Sandy Denman, his sister-in-law, Janessa Denman and niece, Tauriel Zamora, all of Aurora, CO. His special pups, Harlee and Sata, will miss belly rubs and their hiking trips in the mountains. He was loved by many cousins, aunts, uncles and countless friends that he considered family. He was preceded in death by great grandparents, his stepmom, Kathy Reihl, his cousin, Josh Long and his special “bonus” dads, Gary Haines and Don Painter, who he strived to be like.

Adam enjoyed concerts, traveling the world and long road trips to Moab, Utah with his wife, golfing with friends and family, fishing with his nephews, trashing all of his stepdad’s four wheelers and snowmobiles, and rooting for the Green Bay Packers & Wisconsin Badgers. Trips back to Wisconsin to see his family and friends were never without joy, laughter and some form of shenanigans. He always made the time to visit his Grandparents Bob & Lynn Fosler. In addition to his deep connection to his friends and family, as well as his love of football, Adam’s passion was for classic, unique cars. His recent project was a 1958 Chevy Apache long bed, “The Poop Truck”, that he spent countless hours working on, alongside Dianna's father, Bob. Adam also restored a 1972 Oldsmobile Cutlass with the help of his mom, stepdad and father-in-law, all while still working on his first car, "Ransom'', a 1977 Oldsmobile Cutlass.

Even though he moved to Colorado 9 years ago, he always felt Wisconsin was his home. He had a brilliant career as a National General Adjuster with Crawford & Company and the respect he gained throughout his career was obvious. He had a special bond with his team and formed many close relationships with those he met through work over the years. He always enjoyed meeting and helping new people and traveling across the country for work.

As Adam once said, “Time is a fleeting resource. The time you spend with the ones you love is an immediate return of investment.” There will never be anyone like Adam, and the lives that he touched will never be the same for having known him. Adam meant so much to all who got to experience his energy, intelligence, and love. There was never a dull moment when Adam was around. His kindness, humor and his love for his family was something to be envied. If you're ever in search of a smile, look for the burnout marks up and down South Footville Road.

Adam led a life filled with care and compassion. This didn't end because he passed away. He continues to help others through the gift of organ donation.

In lieu of flowers, Adam's family suggests memorials that will be used to establish education funds for Jackson and Holden. Information will be provided at a later time. Online condolences may be made at the Ponderosa Valley Funeral Services website.

We know it would bring Adam so much joy to look down at the sea of green and gold on Saturday, so please join us in wearing Green Bay Packer attire.  If you are a Chicago Bears fan, kindly respect Adam's wishes and view the service from the parking lot.

To send flowers to the family or plant a tree in memory of Adam Reihl, please visit Tribute Store
Tuesday
20
September

Share Your Memory of
Adam
Upload Your Memory View All Memories
Be the first to upload a memory!
Share A Memory
Send Flowers