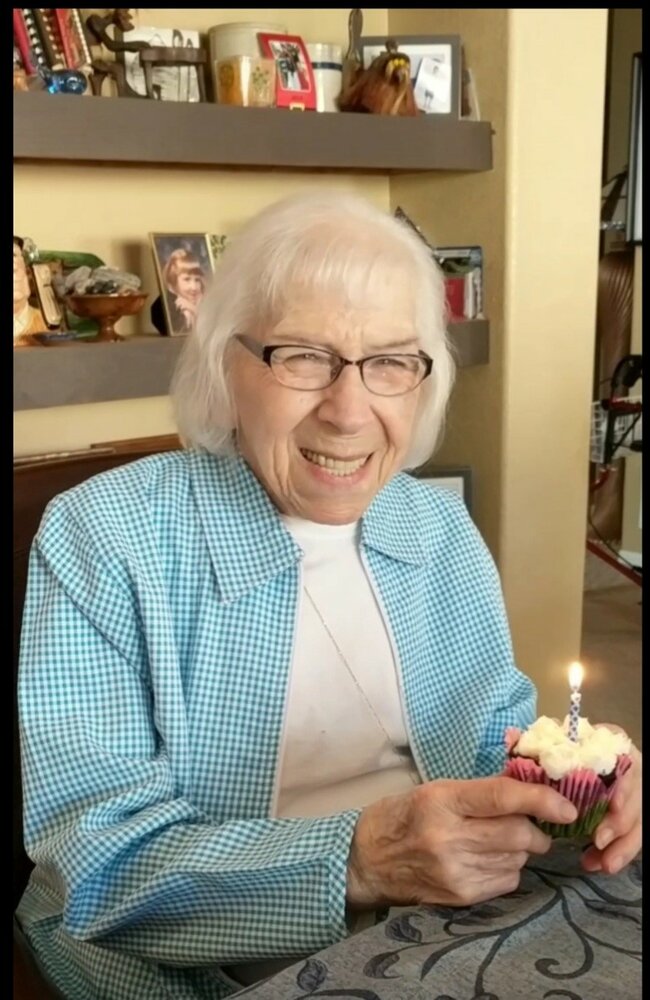 Dorothy (Dot) Rose (Aerl) Travnicek died peacefully on August 13, 2022 in Centennial, Colorado.  She began a long and loving life on March 18, 1927 in Waco Texas with her parents, Dewey V. and Lorene (Smith) Aerl and sister Louise Lynne.  From 1933 until 1941, the family lived in Cleburne, Texas. In 1941, the family moved to Los Angeles, California, where Dorothy spent her teenage years before graduating high school in 1944.

Following a whirlwind WWII courtship with a handsome young soldier on leave (including a romantic stroll on the California beach with pigeon “bombs” bursting in her freshly washed hair) on June 29, 1945, Dorothy was united in marriage to her inseparable life partner, S/Sgt. Robert A. Travnicek.  Upon his Army Air Corps discharge on October 8, 1945, the young couple returned to the Travnicek family farm west of Clarkson, Nebraska.

In her new role as a Nebraska farm wife, Dorothy developed a love/hate relationship with chickens, a completely loving relationship with her new in-laws, and became a life-long Nebraska football fan.  She and Bob were devoted and supportive parents, and were fixtures in the bleachers at local baseball, softball, basketball, football and volleyball games, as well as concerts and high school plays and other activities. As not only life partners, they became proficient dance partners, award winning Halloween costume designers, card players and good friends and neighbors in their community.

Dorothy was employed at the Clarkson Public High School as Secretary to the Superintendent from 1969 until her retirement in 1989.  She was a frequent companion to Bob on his Federal Crop Insurance adjusting trips, as well as many fishing and sight-seeing trips in their camper and visits with family and friends across the country.  In the fall of 1991, Bob and Dorothy moved to a lake community in Grove, Oklahoma, where they lived until Bob’s death in 2011.  In 2012, Dorothy moved to Castle Rock, Colorado where she lived in the comfort and loving care of her daughter, Jane and her husband, Michael.

Dorothy was a member of the New Zion Presbyterian Church of Clarkson, a former Youth Fellowship sponsor, and a member of the United Presbyterian Women’s association.  She was also an avid and talented artist, and many of her drawings and paintings grace the homes of family and friends.  Dorothy loved to read, work puzzles, was a wonderful cook, and compiled a family recipe book, sharing her favorites for the family to enjoy.  Additionally, she researched and wrote a very inclusive and detailed (exhaustive) family history, tracing back her side of the family as well as the Travnicek family.

Despite being homebound for most of her 10 years in Castle Rock, she developed quite the fan base, often being the center of attention at parties and gatherings of family and friends.  Many family gatherings, Christmas and Halloween parties (she always dressed up!)  and birthday celebrations were capped off by her 95th birthday party in Castle Rock, attended by all 4 children and spouses, 2 grandchildren and local friends.

Dorothy’s life is celebrated by 4 children, William (Patricia) of Omaha, Nebraska, Gary (Marian) of Miami, Florida, James (Nancy) of Randolph, Nebraska and Jane (Michael) Mennem of Castle Rock, Colorado, 12 grandchildren, 13 great grandchildren, nieces and nephews, and many friends.  She was preceded in death by her beloved husband, Robert, and loving parents and sister.

While constrained by decreasing physical capabilities in her later years, Dorothy never lost her compassion, sense of humor or interest in others and the world around her.   Always placing the needs of others before herself, she left a legacy of love felt by all who knew her.  She greatly appreciated and acknowledged the kindnesses others showed to her, and her family joins in thanking the many people that entered and touched her life.

In lieu of flowers, and in honor of Dorothy’s warm and generous spirit, memorials may be made to New Zion Presbyterian Church, the VFW Post 6419 in Clarkson, Nebraska, or local food banks or animal shelters.

A memorial service will be announced at a later date.

Memorials may be made to New Zion Presbyterian Church,  The VFW 6419 in Clarkson, Nebraska, or local food banks or animal shelters in honor of Dorothy’s warm and generous spirit.

To send flowers to the family or plant a tree in memory of Dorothy Travnicek, please visit Tribute Store

Share Your Memory of
Dorothy
Upload Your Memory View All Memories
Be the first to upload a memory!
Share A Memory
Send Flowers