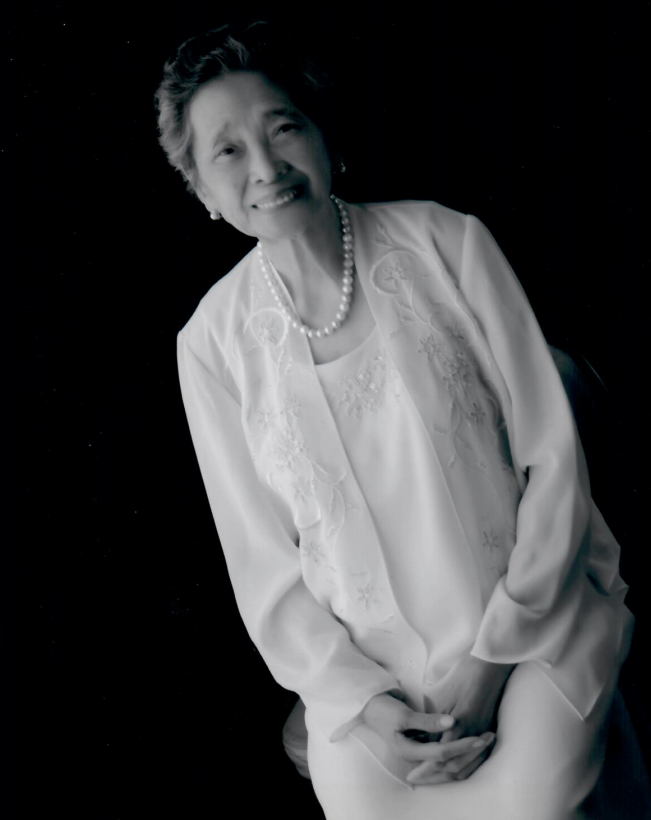 Feliza was born on April 30, 1927 in Mexico, Pampanga Philippines to Felixberto Yumul and Juliana Supan.  She is the second eldest among 8 children: Rosa, Celia, Teresita, Felicidad, Felixberto, Jr., Deseo, and Elenita.  Her father died during the World War II, leaving her mother to raise all the children on a teacher’s salary.  Feliza put herself through school and graduated with a BS in Education from Arellano University.  She started her career as a teacher and eventually became a Community Coordinator at Geronimo Elementary School in Sampaloc, Manila.  She married Ignacio Pasion on May 16, 1954.  Together they raised 6 children in their Teachers Village home.  Ignacio immigrated to the United States in 1972.  In 1973, Feliza followed with her 4 youngest children and settled in the Chicago area.  The 2 older children followed in 1974.  While in Chicago, she worked at Montgomery Ward and supplemented the family income doing what she loves, cooking Filipino specialty dishes.  Ignacio was recruited as an accountant for OEA.  They moved the family to Aurora, Colorado in the summer of 1975.  Feliza was hired by the same company as a Materials Controller. She retired in 1990.

Feliza was one of early Filipino settlers in Colorado.  She is well known for her welcoming personality to new Filipinos in Colorado.  She enjoyed hosting parties almost every weekend connecting new families with settled families.  With open arms, she graciously “adopted” many people who affectionately called her ‘Ima’ or ‘Mom’ in the Colorado area.  She was a devout Catholic and is one of the early parishioners at St. Michael. Ignacio and Feliza also volunteered at the Mother Cabrini Church on a weekly basis, where she met several Filipino devotees.  Feliza was devoted to the Virgin Mary and faithful to the daily Rosary.  She was known for her impeccable memorization of the Litany of Our Lady of Loreto.

After Ignacio retired in 1992, he and Feliza returned to the Philippines with the of intent living their retirement years there.  They returned to the US in 1996, longing for their grandchildren’s love and affections.

Feliza was preceded in death by Joy in 1995 and by Ignacio in 2014.  She is survived by her 5 children: Wilfredo (Rachel), Wilbert (Edith), Philip (Lynne), Judy (Ariel), and Julius (Jill).  She is also survived by twelve grandchildren:  Johann, Christine, Catherine, Eric, Jessica, Jennifer, Caitlyn, Neal, William, Erin, Skyler and Cameron.  She was blessed with 9 great-grandchildren: Reena, Eva, Eliana, Dev, Lucie, Owen, Orson, Gianna, and Brooklyn.

Funeral Mass Wednesday at 11:00am at Ave Maria Catholic Church. Interment next to her husband and daughter at Hampden Memorial Gardens.

To send flowers to the family or plant a tree in memory of Feliza Pasion, please visit Tribute Store
Wednesday
18
May

Share Your Memory of
Feliza
Upload Your Memory View All Memories
Be the first to upload a memory!
Share A Memory
Send Flowers