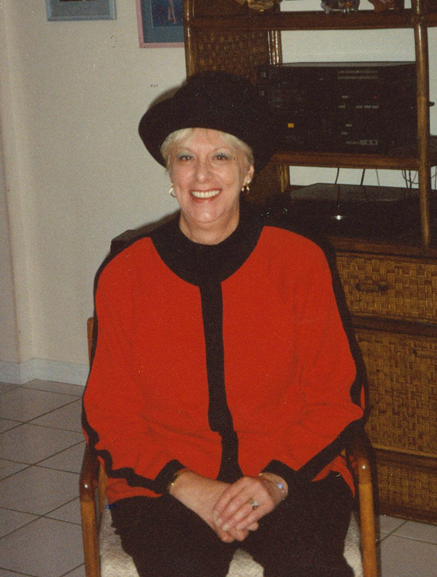 Renee was born on July 8, 1930 to the late Aurele G. Roy and Laura LaRocca in New York City.  She attended Trinity College in Vermont and went on to have a very fulfilling career as a high school business teacher for many years in the Commack, Long Island, New York school system.  After retirement she visited Colorado for the first time and decided she wanted to live there.  Once settled in Colorado she enjoyed riding around the local Safeway and Walmart stores on her scooter where everyone who worked there knew who she was.  She also enjoyed knitting and crocheting as her hobbies.

Renee is survived by her children James McCarron (Jane) and Lynn Filosa (Alex).  She was preceded in death by her daughter Dolores, with whom she is now reunited.  Renee is also survived by her grandchildren Laura Juan (Thomas), Helen Filosa, Michael McCarron and Matthew McCarron as well as her three great-grandchildren Spencer Juan, Scarlett Juan and Carter Juan.

Final arrangements have been entrusted to Ponderosa Valley Funeral Services.  A private funeral will be held on October 6, 2021.  Inasmuch as there will not be a formal viewing the family requests that in lieu of flowers donations in Renee’s name be made to either the St. Jude’s Children Research Hospital (www.stjude.org) or Shriners Hospitals for Children (lovetotherescue.org).

To send flowers to the family or plant a tree in memory of Renee McCarron, please visit Tribute Store

Share Your Memory of
Renee
Upload Your Memory View All Memories
Be the first to upload a memory!
Share A Memory
Send Flowers