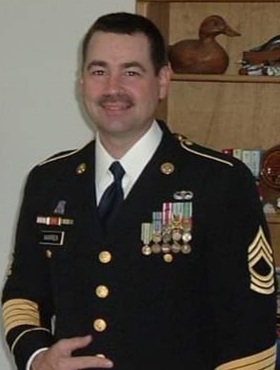 Ellis Simon Warren Jr., 61, Parker, CO. Ellis passed away peacefully surrounded by his family after a courageous fight with ILD on March 14th, 2021.

Ellis Simon Warren Jr, was born August 31st, 1959 in Waterbury, CT. He grew up in Valley Station, Ky. In his youth he graduated from Valley High School and was in ROTC for four years, was in the Boy scouts and proudly earned his Eagle Scout, he participated in many sports and was always an academic scholar.

Ellis enlisted into the Army at Fort Bragg, CA in 1978 and retired from the military in 1997 as an IW Team Leader, Master Sergeant/E-8(selected). While in the service he worked as a Senior Information Operations /Warfare Analyst and IW Team Leader. (MOSs 98K, 98J, 95B, 71L) He was Responsible for OT&E of prototype communications systems throughout the Department of Defense. He served as First Sergeant for an 80-person unit. He Performed as Senior Signals Analyst responsible for detecting, acquiring, analyzing, resolving, and reporting threat entities in tactical and strategic environments. He studied for reverse engineering purposes information assurance and CERT responses to network attack scenarios for self-protection. He researched and studied Internet Technology, UNIX, mobile data communications, and their employment. He was personally responsible for advising contractors throughout development of special access projects. Ellis crafted the man-machine interface design for several user interfaces. He was a Senior Platoon Sergeant for 35 personnel and Joint Mission Controller or Director in several assignments for 24/7 missions managing multi-INT (ASAS) teams of analysts and technicians staffing numerous departments. He facilitated collection management and provided shift and daily intelligence reports to current joint operations watch officers as shift supervisor during assignments to Field Station Augsburg, Field Station Berlin, Germany and as Mission Controller for the Kunia RSOC in direct support of the PAC Fleet and national level intelligence consumers. He stood up the Signals Development Center at KRSOC.

He served two tours at Ft Meade, MD working in DEFSMAC as a Multi-INT domain analyst, later an USAF special weapons program under SDI, and lastly as a Senior Information Warfare Analyst assigned as LNO to the LIWA from the Army Technical Control and Analysis Center (ATCAE). In the ACOF at Ft. Meade. Ellis fulfilled RFIs from field operators from All-Source Analysis resources. He performed as program COMSEC custodian and as INFOSEC Cadre for a special compartment where he interacted with CI/HUMINT activities.

At Vint Hill Farms Station, VA Ellis performed vulnerability assessments as Red-Team.  At Ft Bragg, he performed DF and Jamming, Target Development and worked in the EPDS, the SRF and with TROJAN systems.

Beyond his military career Ellis worked two years as an Intelligence Specialist and was the Project Lead and principal investigator for the Army’s new Tactical Signals Technology programs. He also worked as a Lead Project Engineer and Performed as the Project Engineer responsible for R&D of Naval Space and Warfare Cryptologic systems. Duties included Project Management of Signals Research and Technical Development systems on surface ships. Went on to serve as a SIGINT Systems Analyst, Responsible for proposing new ideas for USAF Cryptologic systems deployed on-board aircraft as well as acquisition and transition to production and then serve as a SIGINT Systems Integrator for Lockheed Martin in Rome, NY and continued as a Technical Advisor (SETA) to PM for Tactical Signals Technology (TST), Defense Cryptologic Program (DCP), and USAF program managers during new system development.

He transferred in 2004 to Aurora, CO as a Signals & Image Processing Engineer where he analyzed signals & images for process engineering on a near-real-time systems operations and maintenance contract (Diamond) as a teammate of Northrop Grumman/Raytheon for Space Systems (NES). Prior to integrating new system software and procedures, he was responsible for algorithm development strategies. Continued as a Systems Engineer Where he performed as National-Tactical Integration Lead Engineer for technology integration on USAF Intelligence, Surveillance and Reconnaissance (ISR) aircraft supporting systems operations. He was the principal investigator for leveraging national tactical intelligence (NTI) systems and data for the warfighter. Performed as Integrated Product Team (IPT) Lead Engineer for USAF Intelligence, Surveillance and Reconnaissance aircraft (ISR). Perform as Systems Engineer responsible for advanced systems signal analysis for the Mission Readiness Team (MRT) on two mission systems. Ellis ended his career as a proud Entrepreneur owning a Long-haul transportation business called Warren Front Range Transportation where he was owner/operator as a Transportation Engineer and had the opportunity to travel all over the United States allowing him to visit the many beloved family members along the way, something we all looked forward to, he had just retired in Aug. 2020.

Ellis was extremely intelligent man as his accomplishments show, he was always researching and learning something new every day, was always ahead of his time.  He had a true passion for history and literally was a Walking Encyclopedia!! He had hoped to write a memoir one day about his travels, achievements, and accomplishments and what a read that would have been! Ellis was a strong Catholic and his faith was important to him, he leaned on it through good and bad times. Ellis was also a Mason of the State of New York Masonic as well as a Shriner and the Scottish Rite. Ellis was with the United States Coast Eight District Western Rivers Region and was elected Division Vice Commander.

Ellis stated out of all the things he did in his life, that his greatest accomplishment was being a proud loving father and Pepe’ to his grandchildren, he will be greatly missed by all his family and his many friends and will be forever in our hearts and never forgotten!  Rest in peace our dear El, you will always be our “Sunshine”!! “Airborne all the way!”

In lieu of flowers, Ellis wished any contributions to be given to his son Jakob and to go towards a college fund for him. Please send any memorial contributions for Jakob Warren in his name to : Kathleen Fitzgerald, 2141 Desoto St, Maplewood, MN 55117.

To send flowers to the family or plant a tree in memory of Ellis Warren Jr., please visit Tribute Store

Share Your Memory of
Ellis
Upload Your Memory View All Memories
Be the first to upload a memory!
Share A Memory
Send Flowers