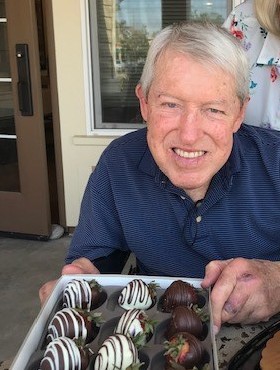 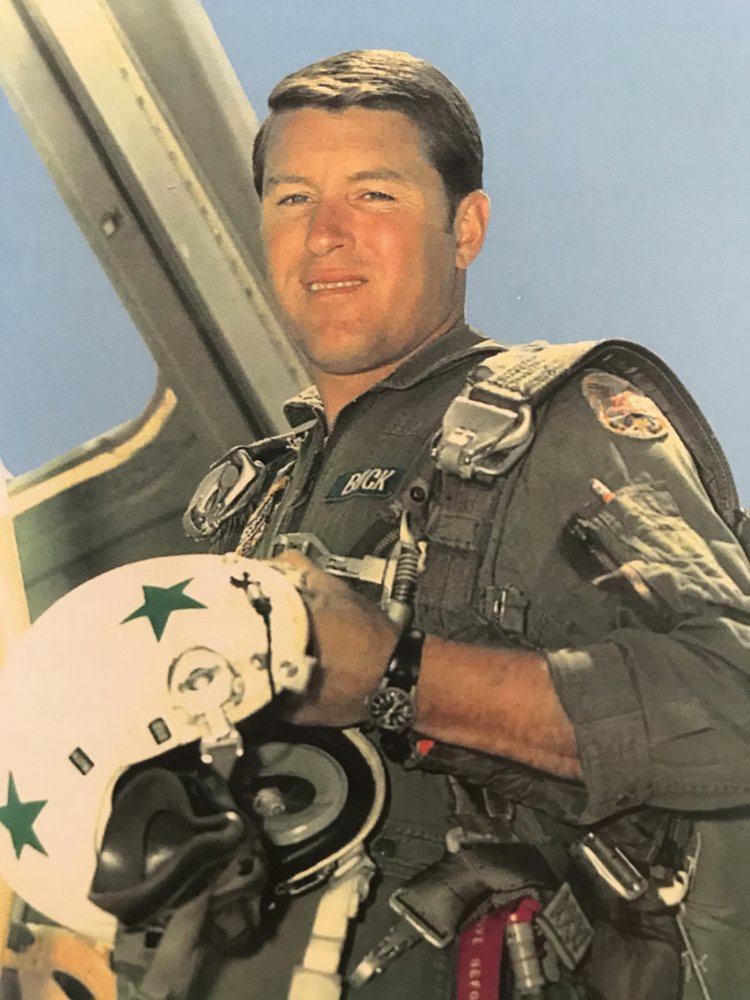 Irving "Irv" Lowell Buck, Colonel USAF, Retired, of Parker, Colorado passed away peacefully with his family at his side on August 17, 2020.

Born on the beautiful Buck family Star Spring dairy farm in the rolling hills of Starrucca, Pennsylvania on August 8, 1934 to Florence (Barnes) and Lowell Buck, he endured the untimely death of his father as a young boy. Supported by his quietly strong mother and loving extended family, Irv went on to graduate from Penn State University where he studied Agricultural Science. Foregoing childhood visions of becoming a cowboy or baseball star, Irv's ultimate dream of flying took him in an unexpected direction, trading in tractors for turbofans, and eventually traveling all around the world during back-to-back careers as a fighter pilot and commercial airline pilot/executive. Commissioned a U.S. Air Force Officer in 1956, Irv flew a wide range of aircraft in war and peace, including: the T-33, F-86, F-101, F-102, F-105, F-106, A-1, UV-18, and E3-A. (Aviation fans might want to take a moment to catch your breath.) While posted as a young fighter pilot at K1 Sawyer Air Force Base in the Upper Penninsula of Michigan, he met and married his sweetheart Kathy in August 29 1960. From patrolling polar icecaps over Greenland to warn off Soviet bombers during the Cold War, to flying intense close air support combat missions in Vietnam, to earning an MS Degree along the way in night school, to leading ground-breaking international security cooperation activities, Irv's Air Force career spanned the globe and reflected his deeply rooted commitment to America - its Constitution, people, generous spirit, ideals, and indispensable role in the world. That 26-year career took him and his family to multiple postings around the USA, including Texas, Georgia, Illinois, Michigan, Virginia, Florida, Kansas, California, Oklahoma, and Colorado. Irv retired from the Air Force in 1982, wearing Colonel's wings and decorated with the Distinguished Flying Cross.

Among his many homes, Parker was to become Irv's home of choice. He and Kathy, Courtney, and Chris settled in The Pinery in 1983, when Irv took up a new job as Vice President for Operations and Maintenance of the then Pioneer Airlines in Denver. In that role, he oversaw the daily operations of a growing commuter airline serving mountain-hopping and essential service routes in five Western states. Never one to sit behind a desk, Irv often flew routes himself in the company's fleet of Metroliners and Beech 99s. The airline business in the early 1980s was a turbulent time. After exciting initial growth, Pioneer Airlines was compelled to shut its hangars in 1986 when their major feeder-line partner decided to play rough. Undaunted, and with two kids in college, Irv kept the family afloat doing whatever he needed to do - even selling insurance until he could get back into the cockpit with Rocky Mountain Airways, where he served as Director of Aircrew Training. In that role, he also regularly flew mountain routes, including the not-for-the-faint-of-heart approach into wintry Telluride. When he reached the age where he could no longer (by FAA regulation) take the yoke as pilot-in-command, he happily signed on with Continental's Air Micronesia back-seating as a Boeing 727 flight engineer, flying island-hopping routes and eating from bento boxes in the South Pacific for two weeks a month.

When it was finally time to hang up his flying spurs in 1999, Irv turned full-time to his other passion - community and international service. He spent a number of years with Kathy assisting at summer camps in the Balkans run by the Global Children's Organization, helping children and communities to overcome the trauma of war. In addition, he was a long-serving docent at the Denver Zoo, where he remained proudly in docent emeritus status. Irv also engaged intensively as Primary International Contact for the Rotary Club of Parker. In that capacity, he led Rotary efforts to implement major watershed management projects in Western India, involving trips to India to review progress in close collaboration with the Rotary Club of Mid-Town Bombay, and ultimately bringing dramatically life-changing water resources to impoverished rural communities.

Alongside all of this, Irv and Kathy traveled the globe with dizzying frequency, reflecting their shared passion for culture, history, food, and interacting with people from all walks of life. Over the years, a very special corner of the South of France became their cherished, not-so-secret hideaway during lavender season.

The center of Irv's rich and varied life was his family and friends. Anyone who knew him knows he would do anything to help them. Generous to a fault, equally at ease with presidents or paupers, stunningly devoid of ego (and that for a fighter pilot, no less), interested in everything and everyone, a true citizen of the world has "slipped the surly bonds of earth". Our hearts are broken, yet full and overflowing with his love and example of a life so very well lived.

In lieu of flowers, donations in Irv's memory may be made to the Rotary Foundation, www.rotary.org/en/donate. Rotary Foundation c/o Rotary International, One Rotary Center, 1560 Sherman Ave., Evanston, IL 60201-369 8

To send flowers to the family or plant a tree in memory of Irving Buck, please visit Tribute Store
Thursday
27
August

Share Your Memory of
Irving
Upload Your Memory View All Memories
Be the first to upload a memory!
Share A Memory
Send Flowers