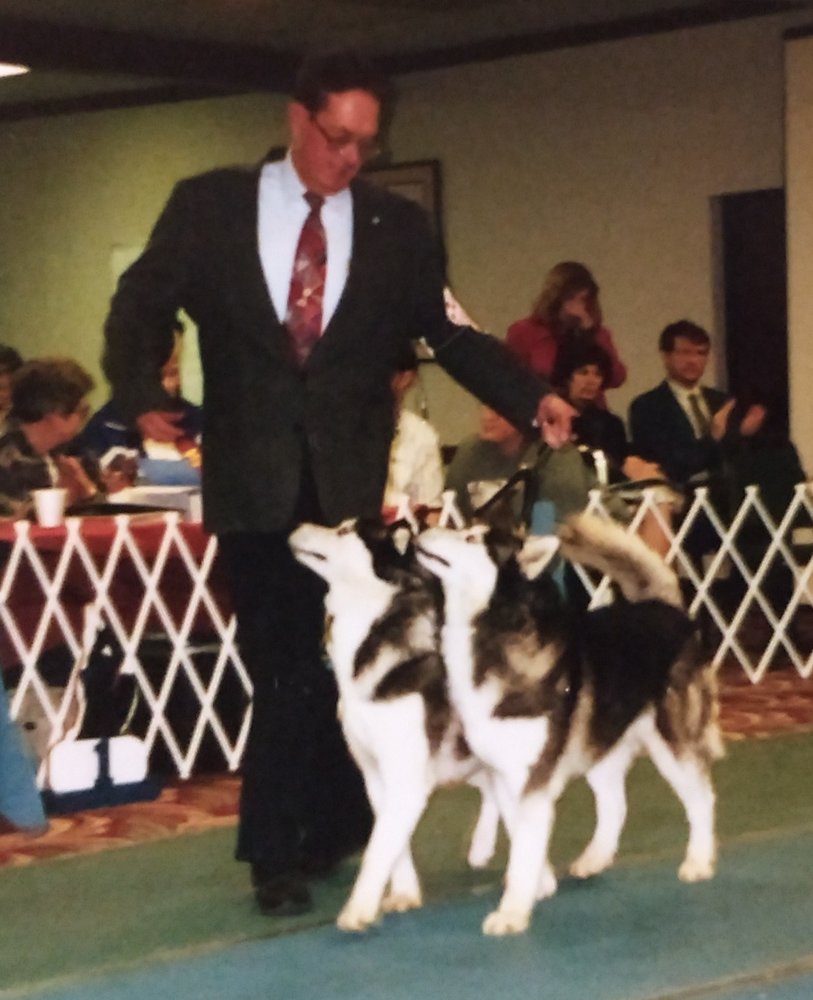 Howard Hinsey passed away on October 28, 2019.  Having been born in Ashville, North Carolina to Ralph and Marguerite Young Hinsey, he and his two older brothers moved to Denver when he was six years old. He attended Lincoln Elementary, Byers Junior High, and graduated from South High School in 1950.  While attending the University of Colorado, he met the love of his life, Mary Appleby, and they married on November 25, 1954.

After graduating with a degree in Civil Engineering, he moved to Illinois, but the Rockies and the Mile High City brought him back to Colorado. While working for Stearns Rogers, he relocated to Lompoc, CA, to work on a launch pad at Vandenberg AFB.  Next, he and his growing family were whisked away to a dam project on the Platte River in Auburn, NE.  He also worked on projects in Guam, Hawaii, and Alaska.  Next, it was back to Colorado and a move to Parker, CO in 1972 where he and Mary created Sibaska Kennels and raised Siberian Huskies.  Finally, he switched companies and worked for RW Beck where he was a project manager for a recycling / energy plant in Harford, CT.  Upon retirement, he and Mary moved back to Parker, CO in 1996.

His love for the Siberian Husky consumed many of his off-work hours.  He was passionate about preserving the standards of the Husky and enjoyed showing his dogs, both in obedience and in confirmation.  His affection ultimately led to his leadership roles as a show chairman for the Rocky Mountain Siberian Husky Club and the Terry-All Kennel Club for many shows, being active with the Connecticut Valley Siberian Husky Club (presented with an honorary lifetime membership), as well as becoming President of the Siberian Husky Club of America.  He and Mary were recently both honored by receiving Honorary Lifetime Membership in the SHCA.  Not only did he enjoy showing his huskies, he helped two of his sons train and race sled dog teams.  There was never a dull moment with the dogs around.

He had fond memories of singing with the Mile High Barbershop Chorus and singing at the famed Red Rocks. He also enjoyed bowling and trips to Black Hawk.

Howard was raised in the Methodist Church and continued his faith throughout his life.

Howard is survived by his wife of almost 65 years, Mary Appleby Hinsey; three children: H. Kent Hinsey, Karen Hinsey Hobson (Terry), and Kirk Hinsey; four grandchildren and one great-grandson.  He was preceded in death by his parents, his son Kevin Hinsey (Tammy), and his brothers: Robert C. Hinsey and W. Cecil Hinsey.

Share Your Memory of
Howard
Upload Your Memory View All Memories
Be the first to upload a memory!
Share A Memory
Send Flowers