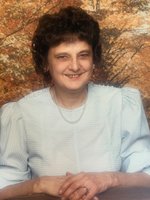 Marian was the loving wife of the late Fred L. Gabriel, a Mother, Grandmother and Great Grandmother.

Born on July 22, 1927 in Chicago, IL, the daughter of Alton Earl Anderson and Edith Berdea Erickson and sister to Lusina Glowen.  Marian and Fred L. Gabriel, Jr. married August 30, 1947.  She lived in Chicago until October 1999 when she moved to Parker, Colorado to be closer to her family.

She enjoyed sewing, Quilting and working in her garden.

She is survived  by her Daughter Constance Loban, her Grandkids Mike Loban and Dené Loban and Great Grandkids Jace, Sean and Kellen.
Marian was preceded in death by her husband, Fred and son, James.

There will be no services for her at this time. We will be doing a graveside service in Chicago sometime next year. She will be Cremated.