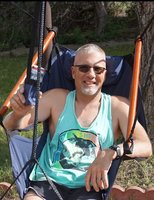 Thomas David Neubert, 56, Parker, CO returned to his heavenly home on August 19, 2019 after a tragic accident. His firm trust in God comforts his family that he is at peace with Jesus Christ. Tom was born September 13, 1962 in Butler, PA to John and Phyllis Neubert. He was one of seven children including Mark, Luke, Judy, Paul, Barbara, and his twin brother Tim. His mother instilled a love of Christ at an early age for all the children. Tom carried that love of Jesus into adulthood. As an adult Tom married and is survived by his two children Nicole and Gabriel Neubert and his grandson William. He later remarried to Carolyn Neubert on June 21, 2008 who he loved with all his heart. In addition to his biological children he is also survived by Carolyn, and her three children Lauren Rolfe, Nathan Davis, and Jared Davis. He was preceded in death by his brother Mark and his father John. Tom had a great passion for tinkering which lead to many amazing hobbies and a lifelong career as a mechanic. He worked 24 years and retired with the City and County of Denver’s Fleet Maintenance Division. Most recently, he transitioned to City of Aurora where he worked for the Aurora Fire Department as a mechanic. His hobbies included shooting, archery, car repairs, and Model T’s. His devotion to his family was only surpassed by his firm belief in Jesus Christ. At any given time, Tom could be found either helping his family or members of the community. He lived his commitment to his faith in everything he did and fully embodied the Christian ideals of selflessness, service to others, and loving his neighbor. He facilitated a bible study group and was a strong voice in his community. Tom was always ready to help anyone at the drop of a hat, regardless of what he might have had planned at the time. If anything can be said about Tom, it was that he was unapologetically himself; a man of faith, a loving husband, a boisterous personality, and one of the most honest and genuine people you could meet. Tom’s memorial service will be held at Parker Evangelical Presbyterian Church at 3:00pm on Saturday August 24, 2019 with a reception to follow. Pastor Gary McCusker will officiate the service.