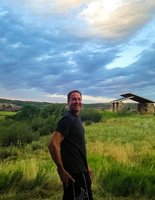 James Michael "Mike" Outlaw, 57, of Littleton, Colorado passed away peacefully at his home on Friday, July 19th, 2019, after his long and courageous battle with mantle cell lymphoma. Born on May 23, 1962 in Derby, Connecticut, “Mike” is the son of James and Dona Outlaw. Mike and his sisters, Kathi and Terry grew up in Sunnyvale, California. Mike married his longtime girlfriend, Karen Carranza in Santa Cruz, California on March 30, 1991. Mike was an avid sports lover and outdoorsman. His passion for football took him through a childhood of playing pop warner and eventually coaching several youth football teams. His love for the great outdoors was connected to the water. He water skied on the Sacramento State University water ski team and had a couple of his own boats throughout his life. He also had a special place in his heart for fishing where he felt connected to his late father, James, nature and the Lord. Mike enjoyed volunteerism at Chatfield State Park and with his church. He also really enjoyed the fellowship and community he and Karen had built there. His love for Jesus and sports collided when he took a Managing Director position at Pro Athletes Outreach (PAO). He is survived by his wife Karen Outlaw of Littleton, Colorado; his daughter Monica and her husband Brandon Witt of Fort Collins, Colorado; his son Martin Campos of Denver, Colorado; his grandchildren Mariah Outlaw, Alexis Duff, Fiona Campos, and Grayson Witt of Fort Collins, Colorado; his sister Kathi and her husband Jerry Brager of Rescue, California, his sister Terry Outlaw of Colfax, California; and his mother, Dona Outlaw of Colfax, California. He is preceded in death by his father James Earl Outlaw. Per his wishes, his body will be cremated, and services will be held in both Colorado and California: July 26th at 2 pm at Calvary South Denver in Littleton, Colorado This service will be available for livestream: https://www.youtube.com/watch?v=JxyCPYjcwYw August 16th is the tentative date for a memorial service in San Jose, California Memorial contributions can be made to The JK Outlaw Family Giving Fund at the National Christian Foundation: https://mygiving.secure.force.com/GXDonateNow?id=a0U0H00000ZJn9bUAD Mailing address: National Christian Foundation, P.O. Box 270741, Littleton, CO 80127, memo: The JK Outlaw Family Giving Fund