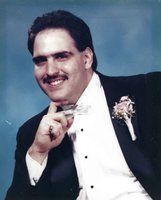 Joseph Anthony Colavito, age 55, passed away on August 3rd, 2019 at the Denver Hospice, located in Denver, Colorado, after a nine and a half year battle with cancer. He was born on November 10th, 1963 in Brooklyn, New York to Joseph Anthony Colavito (father) and Christine Cardieri-Colavito (mother), and was the younger of two children. Joseph was a retired IT Manager for TIAA. Joseph was an avid New York sports fan, a trait he passed on to his three children. Throughout the years Joseph would show unlimited loyalty as his teams of choice, the NY Rangers, NY Jets and NY Mets often came up short. But when they won, the neighborhood knew! Joseph will also be remembered for his good natured, wry sense of humor. Sports were not the only thing Joseph cared deeply about. Always willing to ease the suffering of others, he donated regularly to a number of charities, including Saint Jude, Wounded Warriors, Denver Rescue Mission and MADD among others. Joseph was also a welcoming host, often inviting friends, both his children’s and his own, to his house during the holidays to ensure no one was alone. Joseph is survived by his three children – the center of his life – Joseph, Kimberly and Christopher, and his rescue dog, Lucky. Joseph is also survived by his mother, Christine Cardieri-Colavito, and his sister, Lea Abrams. He was a loving father, son and brother to all, who worked tirelessly to ensure that those he loved were well cared for. Service: Location: Ava Maria Catholic Parish, 9056 East Parker Road, Parker, CO, 80138 Date: August 9th, 2019 Time: 11:00 A.M. MST