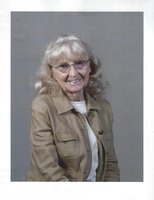 Mary Nordini, 86, of Elizabeth, CO, entered into heaven on August 7, 2019 with family by her side. Memorial Mass at 10:30 a.m. on Wednesday, August 21, 2019 at Ave Maria Catholic Church in Parker. A Reception will follow the Mass at the Church. Final Resting Place will be with her husband, Bernard, at Fort Logan National Cemetery, 2:15 p.m. also on Wednesday, Staging Area "C." Mary was born in Boone, Iowa on May 30, 1933 and later moved to Waterloo, Iowa, where she graduated from Waterloo High School. While in Iowa, she met her future husband, Bernard E. Nordini (Bernie) and they were married on December 4, 1954. They honeymooned in Colorado and loved it so much, they eventually moved there in 1959. Mary retired from the Aurora Public Schools1993 where she was a media tech for many years and then worked for the Douglas County Libraries until she retired in November of 2018. Mary loved to read, travel, and just sit on the porch swing drinking a cup of coffee. She enjoyed crocheting, planting flowers, and baking. Mary was survived by her children, Chip Nordini (Patrice), David Nordini (Sharon), Steve Nordini (Pam), Michael Nordini (Kelly), grandchildren, Matt Banzhaf (Heather), Josh Nordini (Angela), Brandon Nordini (Mary), Gina Nordini, Mary Nordini, Stephen Nordini, Noelle Nordini, Scott Nordini, Lily Nordini, Gracie Nordini, and 5 great-grandchildren. She was also survived by her sisters, Sandra Orr and Margaret Howard, nephew Tim Carrier (Phatsany) and 2 great nephews. Mary was preceded in death by her husband, Bernard Nordini and daughter, Linda Banzhaf.